Well, it’s been a week of getting things done!  So far this week I have finished my Valentine’s Day socks, which went pretty well.

The yarn is from Gnome Acres, and the color is I Lurve Ewe, one of her Valetine/Galentine colors. I bought the yarn a couple of years ago and just now got around to doing something with it!  I didn’t really have a pattern.  I did short-row toes and then plain stockinette up the feet, except for just a little touch of ribbing along the length of my feet to keep them snug – that is just something I am trying out for fit.  Then short row heels and straight on through to k2p2 ribbing.  I still have quite a bit of yarn and could have gone for longer, except I was getting pretty bored and ready to be done with them.  Oh well, the leftovers will go to something fun someday!

Next up, I finished my test knit of the Jackalope Jane Cowl! 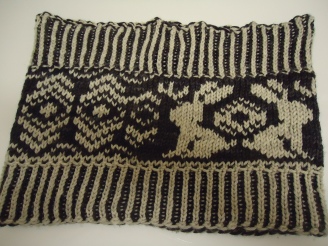 Test knitting was interesting, as it made me be a little more organized than I normally would be.  The designer asked testers to let her know about difficulties we had in understanding the pattern, and also how much yarn we used and our gauge, as well as anything else we thought should be in the pattern.  It was a very well-written pattern, and I enjoyed it a lot.  Also, it gave me a chance to use two technique I have been wanting to use – brioche and double knitting.  The ribbing sections are two color brioche, and the jackalopes and general pattern are double knit. I had done a little noodling around with these techniques, but being a test knitter for this project forced me to use them and get it done. Thank you, Craftsy Unlimited!  Also, it’s another cryptid-based project, which I will do any amount of.  Keep ’em coming, Lattes & Llamas!

Whew!  Also I should be done with my Mom’s felted slippers shortly, and then it’s back to my Twinkle.  What’s on your needles these days?