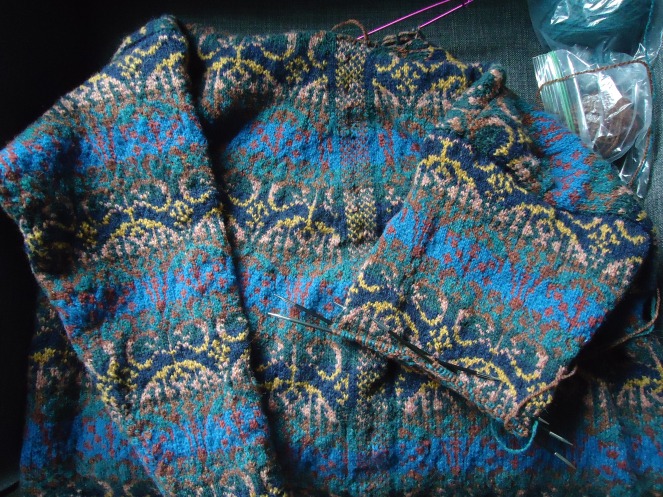 Emotionally, this felt to me like that part in Lord of the Rings:Return of the King where Sam says “Then let’s be rid of it!”, slings Frodo over his shoulders and starts hoofing it up the side of Mount Doom.*  I know there’s still a ways to go, but at least I’m MOVING. **

So I have half a sleeve to go, which I’m hopeful I can get done this week, then I may need to redo the bottom band, then the button band, and then I’m done!  So the moral equivalent of making my way up the rest of Mount Doom, fighting Gollum one last time, and throwing the ring in the volcano.  Except hopefully my sweater doesn’t wind up in a pit of lava.  So it’s not a perfect analogy, but I’m comfortable with that.

*For non-nerds, I can’t think of a good comparable analogy.  I guess having your car stuck in the snow and spinning your tires for a long time and then finally getting some traction?  For southern non-nerds, I really have nothing.  But hopefully you get my drift 🙂

**I’m simplifying the scene quite a bit to make my point. My point is, it feels great to be moving quickly on this project rather than poking along.

6 thoughts on “Knitting My Way Up Mount Doom”