A few months ago, I attempted to make a cowl out of bulky weight-ish handspun that I had bought at a fiber fest, with no pattern and only the barest notion of what I wanted it to be like.  This did not go well.

I did rip the project back, recalculate, and try again – and this time it worked!  Then I had plans to take pictures in a scenic location, and that did not work out.  But regardless, here it is – the 3 Way Cowl! 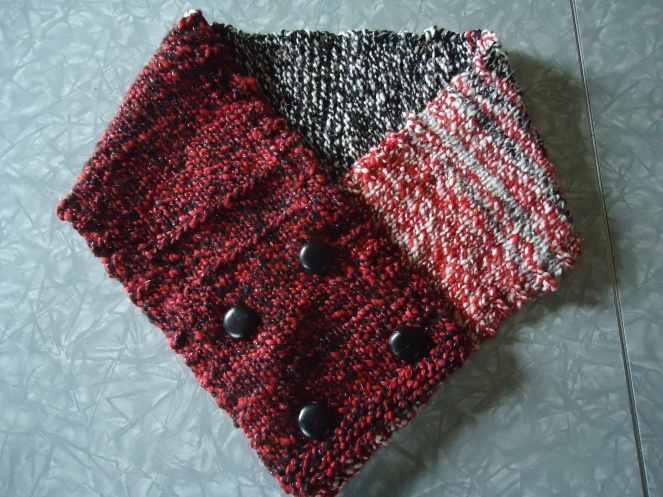 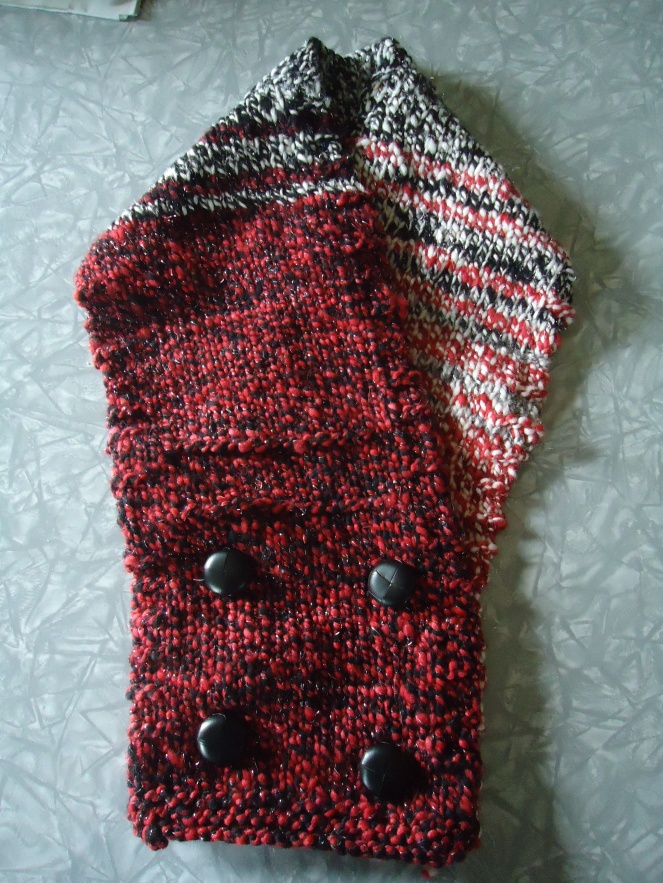 What I wound up doing was to knit a long, flat strip of a width that suited what I wanted, with a bit of garter at the ends and on the sides to keep it from being a tube, added button in a square at one end and button holes to fit, also in a square, at the other end.  Voila!* You can button it crosswise to form the nifty V configuration that I think I like the best, straight on to make a plain loop, or overlapped, which i think would be the coziest fit to tuck under a coat or similar.

The yarn is the yarn of earlier post fame, linked to as above.  I’m happy enough with the way the yarns work together here – it’s not perfect, but I think it is looks fine.  I love that it’s sparkly, but in lumber-jacky colors 🙂

I think picking the button was the worst part of making this thing. Even now I’m not entirely happy, but I think they work fine and look pretty good.  Here are some of the options I tried

The horn ones I tried (on the left) were the closest to what I was trying to get at, but the cowl and the yarn are so bulky that they got kind of lost – too small.

So overall – it worked out pretty well!  I may try this again with commercially available yarn and do up a quick pattern.  But for now, I’m enjoying my new cowl!

*I am saying Voila!  and n’est-ce pas? quite a lot now, as Mr. Quiteayarn and I have been bingeing all 13 seasons of Poirot on Amazon/Acorn.  Poirot, he has many fun phrases and word usages to add to the vocabulary!