This past week I went to Ketchikan, AK for work, and managed to squeeze in a visit to the local yarn shop – The Hive on the Creek!  As advertised, it is a yarn and bead shoppe with a pretty good selection of yarn as well as a smattering of other craft things.  For anyone who plans to visit, they are situated in the downtown area of Ketchikan, very near to the cruise ship docks.  It is a very pleasant shop, with a welcoming atmosphere and friendly, helpful staff.

The shop has two areas – the first is the main sales area, which has nicely set up displays of yarn, as well as a few Alaska themed needlework and quilt kits.  They carry Koigu, Malabrigo, Cascade, and quite a few other mainstream brands of yarn.  In the second room you will find a reasonable selection of beads, and a good rack of yarns from the local-ish Raven Frog Fibers.  They are based in Sitka, but that is close enough to be called local.  The second room also has a nice class/crafting space. There are pattern books and magazines throughout the store, as well as nice kits that look to be assembled in-house.

My souvenir skein was a thrummed mitten kit from Raven Frog

The kit came with a free pattern, which looks pretty straightforward.  There were several of these kits available, and I had a really tough time choosing!  My other stash enhancement was the beautiful abalone buttons you see above.  I did have one unfortunate occurrence while I was there – they charged me for 10 buttons, whereas I only had 5.  They use square, so I didn’t discover it until a few days later when I looked over the emailed receipt, and there was no practical way to address it at that point.  I do think it was an honest mistake on their part, and so don’t hold this against them.  So it was a good lesson for me to make sure I look at my receipt as I am signing, and not several days later.  The real irony there is that I was wishing I had bought more of the buttons, because they really are beautiful! 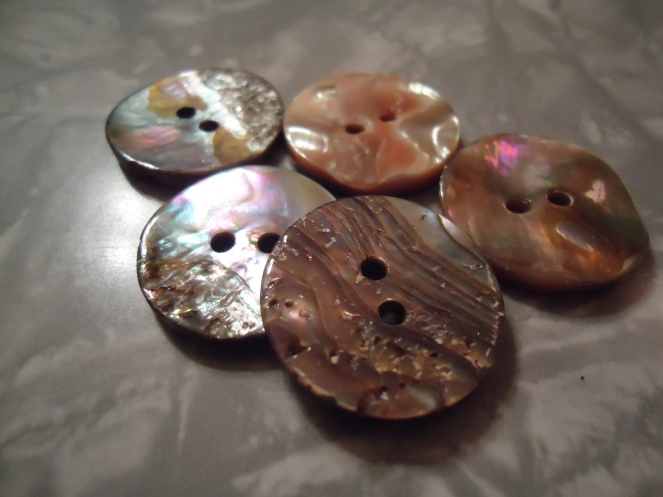 So in summary – The Hive on the Creek is a good stop for yarn-lovers of every stripe, as well as beaders and other crafters!