Now that the everlasting big projects that have been occupying me for the last several months are done, I’ve been able to get a start on a few other items.  Few being the operative word for right now.  One big thing at a time for a while.  I have a few Geek-A-Long squares to catch up on – 3 specifically. Will probably get those done this weekend – pictures as they happen!

The one big thing I just started is a version of the Cancun Boxy Lace Top, which is super cute, looks pretty easy, and is a free pattern to boot.  Here’s how mine started out… 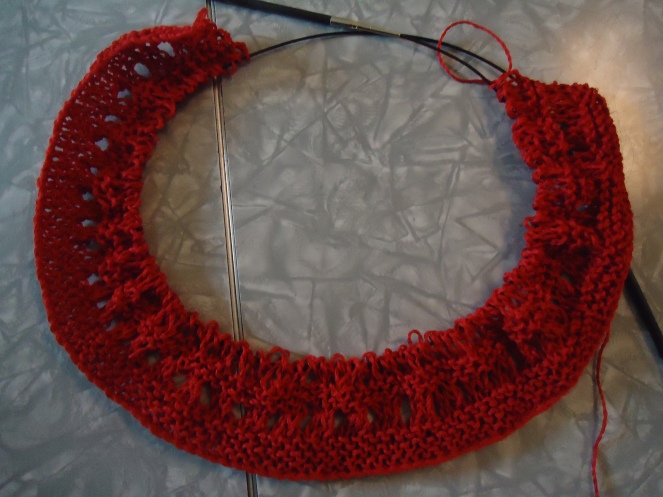 I am using Nako Fiori and size US 8 needles. Judging by the project notes on Ravelry, a lot of folks use smaller needles, even to the size recommended on the yarn, rather than the bigger needles the designer recommends.  So I tried that.  But the fabric was too dense for what I intend to use as a nice light coverup over summer tank tops.  So 8s it is.  It is working up really quickly, as you might expect with DK weight yarn and US 8s.

Other fun fact – this is my project #100 on Ravelry!  I don’t know why that excited me, but it did.  It’s kind of an arbitrary measure – I have made hundreds of projects over the year before Ravelry, or even (and here’s how old I am) before the Internet even existed!  But it’s fun anyway.  I did have a little bit of a hassle with myself trying to pick which project to pick for the momentous 100th project. It was between this and the Deadpool square for the GAL afghan.  It was a close-run thing, but lacy sweater won out.

So that’s what I have going.  What are you working on?

One thought on “Midweek WIP Report”