It’s been a little while since I posted last.  There are a couple of big projects I’ve been working on – Wink, Waiting for the Rain – but they, and posting, got put on the side for the past week.  The design bug bit me again!  I had a lovely skein of yarn from my knitting retreat of earlier post fame, and an idea of what to do with it suddenly struck.

The name of the yarn is Mermaids Under the Aurora, and it looks like this

Because I am kind of literal-minded about some things, I wanted to make something that was a play on the yarn name, and also worked with its properties as a variegated yarn.  I only have one skein of this stuff, and according to the dyer, there will be no more in this colorway.  So something small – I settled on a cowl.  I have a lace-ish wave pattern that I could make work, and also I found  kind of meandering pattern that uses twist stitches and also creates panels that you can use different stitch pattern to fill.  That would bring in a stylized aurora shape, and also allow for different stitch patterns to show off the yarn.  So, I had my concept, worked out the math, and cast on!

And then ripped back, because I had not allowed for any type of edge so it was curling under in a way I was pretty sure was not going to block out.  And then I cast on again!

And ripped back because it looked horrible. 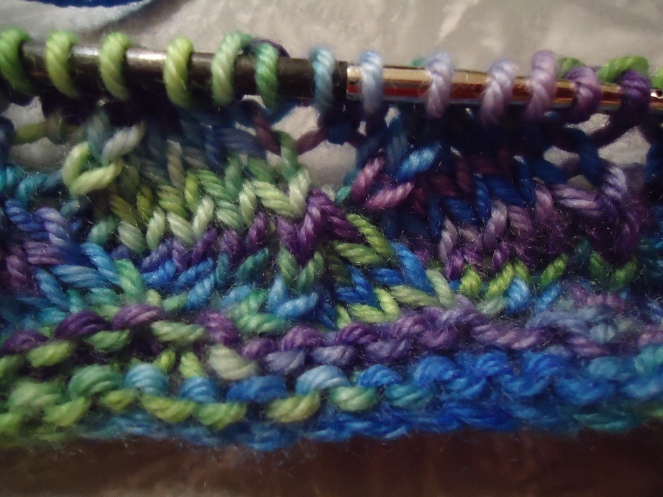 It is beautiful, beautiful yarn, and that darn wave pattern was doing it no favors at all.  So I thought a little more.  And it occurred to me that I had some spare DK weight in a denimy blue that might work.  Frogged it again, and cast on yet again.

The blue worked for the wave pattern!  Then to change from one to the other (I am not a huge fan of abrupt transitions, except in a striping situation), I did a couple of rows alternating between the two yarns, then dropped the blue and went to the aurora. The yarns were different fiber blends, so I was not at all sure it was going to work, but it did actually work out OK.

The aurora part of the cowl did what I was hoping it would – it meandered and it showed off the yarn.

So after letting the pattern wander around for a while, I did a few rows of garter stitch to finish it off and mirror the other edge.  Here is the final result… 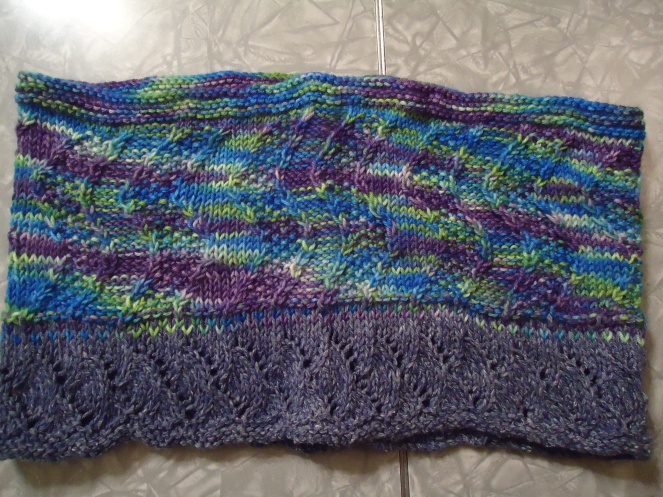 I’m pretty happy with how it turned out!