“Knitting is a competitive sport. Don’t let anyone tell you different.”  Franklin Habit

I had my first experience with actual competitive knitting earlier this year during the Iknitarod.  This is a knitting event organized through a group on Ravelry to coincide with the Iditarod sled dog race held here in Alaska. To participate, you sign up with the group, choose your challenge, and then knit like the wind for the whole time the Iditarod is in motion.  Start time is the time of the actual race, and you are done when the last racer (aka red lantern “winner”) crosses the finish line in Nome. You decide what you want to knit, and are entirely on the honor system.  To add to the fun, most of the knitters are following along with the race via internet updates and discussing the race along with their project progress.  There’s a little uncertainty involved, because the race isn’t really for a set time.  It takes as long as it takes.  It usually goes around 2 weeks, but may be faster or slower, depending on a variety of factors – weather, crazy people, snow conditions, etc.

I was a little ambitious with my project and wound up going at it pretty hard.  In fact, I did pretty much nothing at all but knit, work, and maintain basic life support.  It was worth it in the end, because I got this out of it… 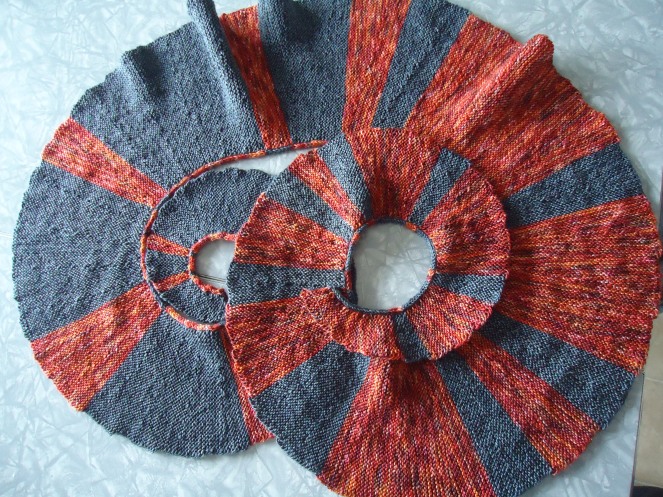 But I about killed my hands and had SO  MUCH housework to do to catch up afterwards.

This is coming up now because there’s a new crafting event in town – the Ravellenic Games , and I’m trying to talk myself out of participating.  The Ravellenic Games are a self-set challenge that parallels the non-knitting Olympics, and in many ways is similar to the Iknitarod.  It does have a set time limit – from the official start to the official end of the Olympics, by Rio time. I am strongly tempted to join in, but common sense is warning me that this isn’t really a great time – there are a lot of other things going on right now, I already have two projects going…  But I really want to, so I probably will.  Also, like the normal person Olympics, this only comes around every 4 years.  Do I want to wait until 2020 to take part in this sofa-bound feat of a sort of physical prowess? No I do not. Also if I was going to be sensible, I would join in but set myself an easy challenge.  Something like finishing one of the two projects I’m already working on.  But that is not really much of a challenge.

Now, realistically, I can set myself any kind of wackadoodle challenge at pretty much any time I want. However, there is a sort of charm to doing so with other people, but not too closely, because it is over the internet.  Also, bad ideas become funny posts, so you will likely be hearing about it pretty soon.