So my plan, around this time last week, was to do a little research and write a nice post about Sanquhar gloves. I would then follow this up with finishing either the pair of gloves I am working on, or the pair of socks I am working on.  Then in a little while, I would start a new MKAL that was starting on…this past Wednesday.  Which I had a little miscalculated because apparently the linear progression of time is a bit of a surprise to me still.

None of those things except the new MKAL starting happened, which is why this is what I’m currently working on… 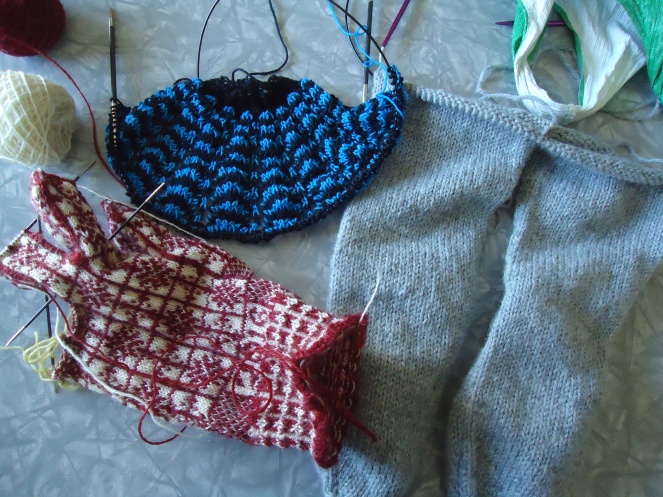 I used to be a big proponent of the “one project at a time” philosophy of knitting, in which you work on one project at a time, until it is done or you give up on it for all time. Then you work on a new project until it is done.  And so on into infinity.  Then I realized the expediency of having maybe two projects going at a time, one complicated one that you could work on when you have the time and bandwidth to work on something more involved, and one easy one that you could work on while at book club or over lunch hour or in the car.  That’s the line I’m trying to hold right now, and it’s a line I’m having trouble with, as you can see.  Well, off to finish one of these projects.  And then that Sanquhar post!